Rehab Science Blog » Lymphedema » Liposuction for Head and Neck Lymphedema – Does it Work? For Which Patients?

A tantalizing new study by a Canadian group recently caught my eye. The authors’ conclusion: “Submental liposuction is an effective and safe procedure to improve the quality of life for head and neck cancer patients suffering from post-treatment lymphedema.” So should we be recommending liposuction for head and neck lymphedema?

Head and neck lymphedema is a chronic and progressive swelling condition caused by damage to lymph nodes and vessels in the head and neck, a very common side effect of head and neck cancer treatment. Head and neck lymphedema is predominantly managed using combined decongestive therapy (CDT), the recommended conservative treatment for lymphedema. This treatment combines massage techniques, compression, and education to reduce swelling and prevent the additional build-up of fluid. Despite the safety and effectiveness of CDT, it suffers from a few key drawbacks: it doesn’t cure the underlying lymphatic damage, it has limited effectiveness on very advanced cases of lymphedema, and patients typically need to learn and adhere to life-long self-management practices. Consequently, there is much interest in devising new methods of treatment, including surgical options.

Broadly speaking, microsurgical treatments for lymphedema such as lymph node transplantation or lymphovenous bypass (connecting lymph vessels to veins), have enjoyed marginal success. At best, these approaches have been shown to reduce (but not eliminate) symptoms for some patients. They are also inherently difficult to perform, and not widely available. Arguably the most dramatic surgical results have been achieved by a small number of teams who have successfully used liposuction to treat cases of advanced lymphedema of the arms and legs. You can read our detailed discussion of this procedure here: “Patient Guide to Liposuction for Lymphedema”. This appears to be a very promising approach to reduce some of the symptoms of advanced lymphedema in some patients, but once again, it is not a cure.

Considering the success of liposuction for arm and leg lymphedema, you might be tempted to take this latest study’s conclusion at face value. But beneath the surface there are problems with this new study, and the authors’ conclusions. 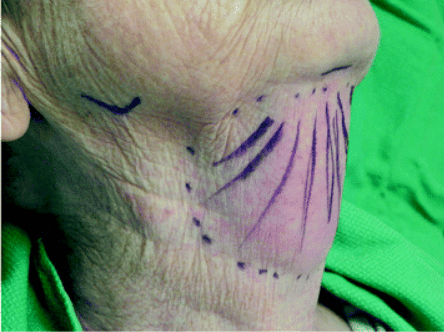 But first, a caveat: although I will spend much of the remainder of this article questioning the authors’ approach and conclusions, I commended them for their work on this special population, and I hope it spurs additional clinical interest and research. It’s important to also keep in mind that despite best intentions, setting up and executing a ‘perfect’ clinical study is in most cases not possible. Clinical studies are expensive, time consuming and difficult, and so researchers need to make compromises. That said, when clinical study results are used to recommend real-world clinical interventions, we have a responsibility to be skeptical and fastidious in our analysis.

With that out of the way, here’s why you should be skeptical of this study’s conclusions:

I think it’s elucidating that in the introduction of this paper the authors comment that: “The decision to undertake such a trial was based on feedback from other surgeons who felt that the disease process may simply improve with time despite our belief that this is not the case.” It makes me wonder if these unnamed surgeons were unconvinced that the swelling experienced by these patients was due primarily to fat (since fat wouldn’t go away on its own), and perhaps instead suspected that it was due to fluid accumulation. If so, swelling could go away on its own if it wasn’t due to lymphedema, or with combined decongestive therapy if it was. But I’m just speculating.

There is a significant body of clinical research that supports the use of liposuction for advanced cases of arm or leg lymphedema, but it doesn’t appear to have informed the clinical approach used in this study. This larger body of work presents a convincing argument that liposuction is not a cure for lymphedema (how could it be?), and not surprisingly, that the swelling will return without appropriate post-treatment conservative lymphedema management practices. Consequently, since the patients in this study are apparently not following conservative lymphedema management practices post-liposuction, the swelling will return if it was lymphedema, and won’t return if it wasn’t.

Of course, we can’t know with certainty what’s going on in this study. Perhaps these head and neck cancer patients had a temporary lymphatic insufficiency resulting from lymphatic damage and scar tissue, that this promoted the accumulation of lymph and a relatively quick conversion to fat tissue, and that through liposuction this fat and scar tissue was removed, thus improving lymphatic drainage and curing what could have otherwise have progressed to become permanent lymphatic insufficiency (aka lymphedema). But then again, perhaps combined decongestive therapy could have been equally effective at resolving the swelling and preventing its progression to lymphedema. Or even more likely, that identifying swelling early on and removing it with combined decongestive therapy would have prevented the whole scar tissue, lymph and fat build up in the first place.

So where does this research leave us?

The objective for lymphedema liposuction is to reduce excessive fat (not lymph) that accumulates in advanced cases of lymphedema, and which is impervious to conservative therapy. Liposuction can be profoundly beneficial for arm and leg lymphedema patients, and it’s reasonable to assume that this may be the case for head and neck lymphedema patients as well.

When might liposuction for head and neck lymphedema be warranted?

When might liposuction for head and neck lymphedema not be warranted?

Does the small body of research on liposuction for head and neck cancer patients suggest that cosmetic improvements to neck swelling are possible? Certainly. And I commend the authors and encourage them to do more pioneering work in this field. But should we broadly recommend liposuction for head and neck lymphedema patients, as the authors suggest? Not according to our current understanding of the disease, and not according to the larger body of lymphedema liposuction research on arm and leg patients. At the same time, this larger body of evidence does suggest that liposuction could be very beneficial for some patients with advanced head and neck lymphedema, and as with advanced cases of arm and leg lymphedema, liposuction might profoundly change some lives for the better.