When I entered the field of stem cell research as a graduate student in 2001, the term “stem cell” was virtually unheard of. Not anymore, thanks to an abundance of headline-worthy advances making the news on a regular basis. The concept is thrilling: have a non-functioning body part? Regrow it using a special cell type that holds the potential for nearly unlimited growth and repair: the stem cell.

While most would agree that science is still a very long way from being able to regrow a heart or other complex structure, researchers in academia and industry are scrambling to identify conditions that might be treatable today, using current stem cell technology. What might these potentially treatable conditions look like? Could lymphedema be a good candidate?

To be a good candidate for stem cell therapy, the defective structure needing repair would ideally be:

Could lymphedema fit the bill as an early target for stem cell therapy? Some researchers believe so. I am aware of three early stage clinical trials published to date that investigate stem cells therapies for treating breast cancer related lymphedema: one was published in 2008, one in 2011, and one completed and published in 2017. Here’s how the authors of this latest Phase II clinical trial summarize the results of their study (ref 1):

“Treatment with autologous adipose-derived regenerative cells [in other words, stem cells] can alleviate symptoms and reduce the need for other treatment options during the 6 months follow-up. The treatment proved safe without any noteworthy adverse events. Randomized controlled trials will be needed to verify the positive results.”

I) The researchers’ hypothesis is reasonable: alleviate lymphedema not cure it

Regenerative medicine will hopefully one day offer a cure for lymphedema, but the first step down that path will be to try to use stem cell therapy to alleviate some of the symptoms of lymphedema. This is a logical starting point, and curing lymphedema with stem cell therapy is going to be a LOT harder, as I will explain a bit further below.

In my opinion, the likelihood of a “near-term” stem cell or pharmaceutical treatment to help reduce the symptoms of lymphedema is high. But I put quotations around “near-term” because:

Why do I think the possibility of a novel treatment for lymphedema symptoms is high? Lymphedema is a progressive condition if not managed; the symptoms gradually worsen with time as the initial lymphatic deficiency contributes to ongoing cumulative damage to still-functional neighbouring lymphatics. Repairing the initial damage or dysfunction will be very difficult, but preventing and repairing on-going damage to healthy lymphatic vessels is relatively low hanging fruit. Natural repair processes in the body are already at work in these patients, but this repair process appears to eventually stall out, apparently due in part to inhibitory inflammatory processes (ref 2). Enhancing the normal repair process by supplementing the body with stem cells therapy (or the protein factors secreted by stem cells – see more on this below) is a promising strategy. In fact, there is a related lymphedema drug candidate called Ubenimex which appears to target this negative inflammatory process that is already undergoing a clinical trial.

Curing lymphedema with stem cell therapy is still far off

In my opinion, the likelihood of a “near-term” regenerative medicine (stem cell) or pharmaceutical cure for lymphedema is very low.

Why do I think a stem cell cure for lymphedema is still far off? Lymphedema is caused by a significant loss, damage or abnormal function of lymph nodes and vessels. These nodes and vessels make up an intricate and extensive fluid transport and immune surveillance system. Smaller lymph capillaries and vessels actively drain excess fluid from tissues, which in turn transport the fluid into larger collecting lymph vessels at lymph nodes on its way back to joining the blood circulatory system at the heart. The body is robust and the lymphatic system has excess fluid handling capacity, so significant dysfunction or disruption of this system is required before lymphedema onset occurs. Unfortunately, this means that if you do have lymphedema symptoms, then you likely have a significant level of damage, and so curing it will also require significant repair/regeneration.

Many of the best opportunities for stem cell therapy today lie in enhancing or supplementing the body’s own natural repair and regeneration processes. Unfortunately, the body’s natural repair processes appear to be unable to regenerate lymph nodes. If the body can’t normally muster a good attempt at re-growing or repairing a certain damaged structure, it’s likely that it will also fail one or more of my three criteria above for a (potentially) stem cell-treatable condition using today’s technology. Indeed, functional lymph node regeneration using current stem cell therapy techniques does not currently appear feasible because: 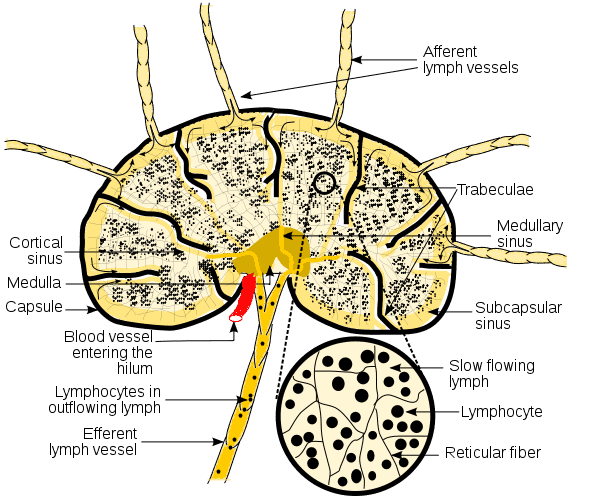 Figure 1: The relatively complex structure of a lymph node. Image courtesy of https://en.wikipedia.org/wiki/Lymph_node.

Lymph nodes and vessels are formed during embryogenesis (around the sixth week of fetal development) and integrate into the blood circulatory system as it develops. Perhaps not surprisingly then, using stem cell therapy to regrow functional lymph nodes that are appropriately integrated with lymphatic and blood vessels goes beyond our bodies’ natural healing capabilities, and our current scientific understanding.

Contrast the lymphatic system with one of the trendiest targets for stem cell therapy: the eye. Repairing various eye conditions will require relatively small types and numbers of cells, and with simple structural organization. The eye has numerous other advantages that make it an attractive target, such as the relative ease of growing the relevant cell types, surgical simplicity of the eye, reduced possibility for immune rejection, good animal models, ability to easily compare treatment effects to the other untreated eye, etc. (ref 4). Nevertheless, to my knowledge there are still no stem cell therapies for the eye approved in Canada or the US. This should give us some pause when contemplating the likelihood of near-term stem cell therapies for lymphedema.

The authors of this latest lymphedema stem cell therapy trial chose a very popular stem cell type that’s filled with promise: mesenchymal stem cells. This type of stem cell is known to be able to generate a wide variety of different cell types including lymphatic endothelial cells (ref 5), as well as secrete many protein factors that influence vascular repair and inflammation processes (such as ‘VEGF’). It also offers reduced risk of tumour formation compared to some other stem cell types. The two previous lymphedema stem cell therapy clinical trials also used this type of cell, collected from the patient’s own bone marrow (ref 6,7). Building on this previous work, this latest clinical trial harvested a source of mesenchymal stem cells found in adipose tissue (fat), which is both abundant and easily collected, and shows few complications at the donor site.

Why might this be? The simple answer is there is still a lot left to be known about stem cells, even when we are dealing with mesenchymal stem cells derived from well-known sources in adults, and used to treat those same adults (‘autologous transplantation’). It’s not even clear if the beneficial effects observed in stem cell therapy trials arise from the cells themselves (by them generating the needed cell types and thus regrowing/repairing the damaged tissue directly) or from the protein factors they secrete. Many researchers favour the latter hypothesis. A recent study of these same adipose-derived mesenchymal stem cells in advanced diabetic neuropathy (ref 8) found that the positive effects of stem cell transplantation could be replicated by injecting only what the stem cells secreted rather than the stem cells themselves (which incidentally is a much safer approach from a tumor-risk perspective).

We should also keep in mind that just because someone is running clinical trials doesn’t mean that a clinical trial is a good idea. There are scientifically questionable clinical trials performed all the time, including in the field of stem cell therapy. For example, one recent review identified a stem cell clinical trial where the stem cell being investigated was not known to regenerate an appropriate cell type for the condition being treated, and another that raised grave safety and ethical concerns (ref 4).

Drawing conclusions from the recent lymphedema stem cell therapy trial is unfortunately significantly hampered by the poor experimental design of the study.

Here are some requirements of a good clinical trial for lymphedema stem cell therapy:

This latest clinical trial did not pass any of these three criteria. They did try collect objective outcome measurements (in this case arm volume measurements), but they were unable to show any difference between treated and untreated patients, and so instead drew their study conclusions based on how the patients reported they felt about their treatment.

Calling the clinical trial ‘poorly designed’ isn’t an attack on the researchers or their capabilities, the design flaws are instead a reflection of the cost and difficulty of running a clinical trial in the real world. In fact, this same group wrote a review paper in 2014 pointing out the very same flaws in the previous lymphedema stem cell therapy trials (ref 9).

This current trial also suffers from one other significant design concern – the stem cells were delivered to the patients as part of a scar-releasing fat grafting procedure. I don’t know the details of the procedure they performed, but I do know that there is a chance that fat grafting alone may provide benefit to lymphedema patients. In fact, I found an active clinical trial that’s exploring the possible safety and effectiveness of using fat grafting to treat breast cancer related lymphedema (ClinicalTrials.gov NCT02981485).

The researchers performed an interesting trial and interpreted their results with optimism, but they correctly caution that their results need to be confirmed “in a properly blinded randomized controlled trial” and further investigation is required to confirm that any potential “beneficial effect is caused by the ADRC [stem cell] or the fat graft alone, or a combination” (ref 1). The two previous lymphedema stem cell therapy studies also showed promise, but likewise due to poor design fail to add much to the discussion of the possible effectiveness of stem cell therapy for lymphedema (ref 6,7).

It is also important to point out that Phase II studies typically need to show a very strong and clear benefit, because larger and more involved Phase III and IV studies typically include a greater variety of patients and disease-states, which can make small benefits found in early clinical trials disappear.

Patients with lymphedema should feel heartened that bold studies such as these are being performed. The knowledge gained will one day contribute to better treatments for lymphedema symptoms and perhaps eventually a cure for the condition. But the path leading from where we are to where we want to be is still uncertain, with many roadblocks ahead.

I remain optimistic. I will admit that if you look closely (and critically) at any one stream of research in isolation it might feel a bit discouraging, but research can and does make unanticipated leaps when multiple lines of investigation are combined, and there is certainly fertile ground developing for just such a leap in lymphedema treatment. Clinical research into microsurgical, pharmaceutical and stem cell therapies for lymphedema are all exciting and encouraging – and converging. Combine this with our growing understanding of lymphedema pathogenesis and lymphatic development, and it’s clear that both optimism and further funding are warranted.