It was with great interest that I downloaded a recent review article on the topic of selenium supplements and cancer-related lymphedema (ref 1), and when I saw the authors’ summary of their findings, I had to read it right away.

Here’s what it says:

Fig 1: Summary of the relationship between selenium and lymphedema from ref 1. Figure reproduced from ref 1 which you can find in full here:  http://www.sciencedirect.com/science/article/pii/S0946672X1630075X

Not only does it say that selenium supplements (in the form of sodium selenite) reduce lymphedema volume and increase the efficacy of physical therapy, it even offers a snazzy rationale for it: patients with lymphedema have reduced selenium levels, and these levels further decrease with lymphedema progression.

I found myself feeling a bit out of the loop. Why haven’t I heard about the wondrous effects of this trace mineral before? It was time to dig into the data to see what I’ve been missing.

What is selenium and why might it help treat lymphedema?

Selenium is an essential mineral found in our bodies and in various foods we eat. It is needed for the normal function of a variety of enzymes, including ones that play a role in protecting us from damaging oxygen free radicals (also known as reactive oxygen species).

These unwanted free radicals occur naturally in our bodies, but can also be created by radiation treatment, chemotherapy treatment, and as a result of poor oxygen delivery to tissues – such as that which occurs during lymphedema. These free radicals can damage cells and promote inflammatory processes, which can therefore exacerbate lymphedema.

Not surprisingly, selenium is a commonly used supplement by cancer patients. It is hoped by the many users of selenium that large doses of it may help reduce some of the side effects of cancer therapy, including nausea, diarrhea and perhaps even lymphedema.

So far it seems like a compelling story, so where’s the clinical data?

Does clinical data support a role for selenium in lymphedema?

A 2006 review in the esteemed Cochrane Database of Systematic Reviews (which was updated in 2009 with new data) concluded that evidence for the efficacy of selenium is lacking (ref 2). They reported that the available clinical data was insufficient to show that selenium supplementation decreases the side effects of cancer therapy, including decreased quality of life and secondary lymphedema.  So the authors couldn’t make a recommendation either for or against the use of selenium supplementation.

So what new information does this latest review uncover, to support their summary “highlights” in Fig. 1 above?

As it turns out, not much. The new review basically takes another look at the studies published in 2005 and prior. Their arguments appear to rest primarily on the conclusions of three underwhelming studies. One consisted merely of anectdotal evidence, a second lacked statistical rigor and focused on early postoperative swelling (which may not have been lymphedema), and the third was a review article that contained clinical data rather than a dedicated clinical study (but which I unfortunately couldn’t access to properly evaluate).

In addition to their rehash of earlier studies, the authors of this latest review added a bit of their own data to help rationalize why selenium supplementation could be beneficial for lymphedema. In short, if they could show that selenium levels were abnormally low in lymphedema patients, this might provide a rationale for why selenium supplements could be beneficial. Their study consisted of measuring selenium levels in the blood of a population of 234 people with lymphedema of various types and stages, as well as patients with lipedema.

They concluded from their study that: 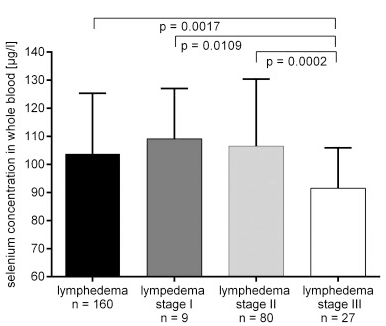 Fig 2: Mean selenium concentration in the blood of patients at different stages of lymphedema. Statistical significance p-values were calculated by the authors using the non-parametric Mann-Whitney U test. Figure was reproduced from ref 1 which you can find in full here: http://www.sciencedirect.com/science/article/pii/S0946672X1630075X

One last point of interest with respect to this new review article: two of the three authors on the paper have a potential conflict of interest in that they work for a German pharmaceutical company that manufactures high-concentration selenium supplements. This of course doesn’t mean that there are any integrity concerns with respect to this study, but it should be noted.

So in conclusion, the Cochrane study summarizes the data to date nicely:

“Research findings do not provide a basis for any recommendation in favour or against selenium supplementation in cancer patients”.

Taking all of the above into consideration, it looks like Figure 1 above should be modified as follows:

Fig 3: Summary of the relationship between selenium and lymphedema from ref 1. Reproduced from ref 1 and modified by Ryan to better reflect the available data.

The real issue with selenium supplementation for lymphedema

Probably not, and here’s why:

So should I consider taking selenium supplements?

You should discuss with your doctor before deciding to take any dietary supplements.

If you are currently receiving cancer treatment, or will be soon, ask your doctor about selenium. Short-term supplementation of high doses of selenium immediately following (or during) cancer therapy might help with some of the side effects of cancer treatment.

Even though the above mentioned Cochrane review concluded that sufficient evidence is lacking to support the use of selenium to treat the side effects of cancer therapy, it sets a high bar for clinical evidence. Since its publication, various researchers have continued to investigate and argue that selenium may decrease various side effects, in particular those caused by radiation therapy (ref 4). Nevertheless, most researchers would agree that more studies are needed to confirm the possible benefits of selenium supplementation, and to determine an optimal dosing level and schedule.

At best, current proponents of selenium supplementation point to low quality studies that appear to suggest that very high doses of selenium may help reduce lymphedema swelling and/or decrease the risk of bacterial infection in the short term.

Even if this proves to be true (and it may not) there is no clinical data supporting long-term selenium supplementation for managing the symptoms of lymphedema. In fact, the long-term intake of high doses of selenium is likely to be hazardous to your health (see discussion above). While dietary recommendations for selenium are sparse, the US Food and Nutrition Board, Institute of Medicine, recommends a dietary allowance of only 55ug/day (ref 5).

Rather than experimenting with supplements, lymphedema can be effectively managed through self-care and self-monitoring practices including self-massage, compression garments, and skin care. A lymphedema therapist trained in complex decongestive therapy (CDT) can help you get your symptoms under control, and educate you about tried and true self-care practices.

While the benefits of selenium seem overhyped, It may be heartening for you to know that  a variety of drug candidates are currently under investigation as potential treatments for the symptoms of lymphedema. The most promising of which may be Ubenimex.