Unbeknownst to many in the medical community and public alike, obesity can increase the risk of developing a chronic swelling condition known as lymphedema.

The minority of patients suffering from lymphedema have what’s called “Primary Lymphedema”.  Classically caused by an inherited or congenital malformation of lymphatic channels and/or nodes, Primary Lymphedema has a low incidence rate of 1.2 cases per 100,000 people aged 20 years or younger (Smeltzer D.M., et al. Primary lymphedema in children and adolescents: a follow-up study and review. Pediatrics 1985;76:206-218).  As a result, in some instances these patients can remain undiagnosed for a considerable time before sufficient expertise is brought to bear on their condition.

In contrast to Primary Lymphedema, Secondary Lymphedema can be easier to recognize.  Secondary Lymphedema is caused by the damage and/or removal of lymph nodes, often during cancer therapy.  Given the relatively high incidence of lymphedema in the cancer population (30-40% by some estimates), and the growing awareness of this condition amongst cancer patients and their caregivers, it is often diagnosed relatively quickly, allowing patients to seek appropriate care.  But another group of Secondary Lymphedema sufferers can be much more difficult to diagnose.

Obese patients (individuals with a body-mass index over 30 kg/m2) have a substantially increased risk of lymphedema compared to the general population.  Obesity-related lymphedema is thought to occur through a combination of increasing fluid “load” on tissues, and impaired fluid “clearance” from tissues.  A combination of factors is likely at play: direct pressure on lymph vessels by excessive fat deposits, decreased muscle-action induced pumping of the fluid, and overwhelming fluid accumulation due to enlarged production and co-incident venous insufficiency.

In one small study, lymphedema as measured by lymphoscintigraphy was found in all patients above a threshold body-mass index of 59; see Table 1 below. Since originally writing this post additional studies have been published that further support the link between obesity and lymphedema, and support a threshold BMI above which lymphedema becomes inevitable. Please see: “Lymphedema caused by obesity may (not) be reversible“. 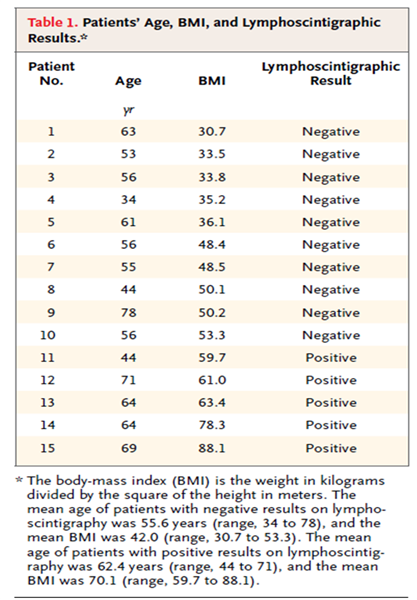 Lymphedema can be frequently misdiagnosed, or remain undiagnosed in the obese population.  Limb girth, symptomatically-similar conditions such as venous insufficiency and lipedema, and the relative lack of awareness of lymphedema in this population, can conspire to prevent these patients from receiving a proper diagnosis.

Lymphedema is sometimes referred to as an “orphan disease” due to its rarity and the corresponding lack of awareness in the medical community.  In the obese population this designation may be particularly appropriate.

While additional health concerns may be top of mind for obese patients, lymphedema can be especially problematic in this population.  Obesity-related vascular impairments (such as venous insufficiency), and general health impairments ( including reduced activity and immune function), can exacerbate the symptoms of lymphedema and increase the risk of infection and ulceration.  Lymphedema can also be more difficult to treat in obese patients.  The techniques of Combined Decongestive Therapy (CDT) for treating lymphedema need to be adapted for this population, including the specific patient education provided, parameters for exercise therapy, self-massage, and compression therapy.

Awareness of lymphedema is growing in the medical community.  However, individuals living with this condition, in particular those who are obese, must ultimately be self-educators and self-advocators.