Arteriosclerosis is a hardening and thickening of the arteries. These vascular changes can eventually restrict blood flow to organs and tissues, resulting in severe complications such as myocardial infarction (heart attack) and stroke. Atherosclerosis is a common type of arteriosclerosis, one that includes fatty plaque accumulation within the arteries (Fig. 1). 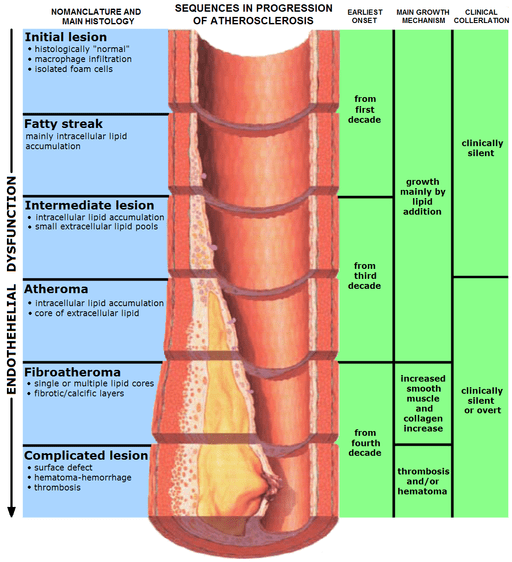 Why would there be a link between lymphedema and arteriosclerosis?

1.     Lymphatic vessels are involved in lipoprotein absorption and circulation

Lipids (fats) in the bloodstream are primarily found in complexes called lipoproteins. The accumulation of certain lipoproteins in circulation, such as LDL (low-density lipoprotein), is a key factor involved in the development of atherosclerosis.

Lymphatic vessels play a role in lipoprotein absorption and circulation:

When normal lymphatic transport is disrupted, as in the case of lymphedema, this leads to a build up of lipoprotein rich fluid in the tissues and swelling. Eventually this lymphedema causes the formation of new adipose tissue in the area – an abnormal physiological event triggered by the altered tissue environment.

Lymphedema that impacts lymphatics connected to the small intestine could also disrupt normal absorption and transport of ingested fats.

The consequences of lymphedema on lipid homeostasis (the balance of lipids in the body) are not well understood, and would be expected to vary with the extent and location of lymphedema. However, a potential link to arteriosclerosis seems feasible.

As discussed above, the impact of lymphedema on lipid processing and inflammation provides a possible connection to arteriosclerosis. This sets the stage for what comes next: experimental and clinical evidence of this proposed connection.

In 2014 two experimental strains of mice were bred together, one with a propensity to develop lymphedema, and the other atherosclerosis (ref 1). The result? The authors of the study concluded that impaired lymphatic function appeared to interfere with proper lipoprotein processing, and caused an increase in blood cholesterol levels and the acceleration of atherosclerosis (fatty plaque build up in the arteries) in the mutant mice.

Additional mouse studies have offered further support for a link between lymphatic function and atherosclerotic processes. But mice, and in particular genetically modified experimental strains of them, are not always a great model for human disease processes.

A recent study for the first time has demonstrated a link between lymphedema and arteriosclerosis in humans (ref 2). The authors of this small but interesting study examined arterial stiffness (a symptom of arteriosclerosis) using an indirect measure called the cardio-ankle vascular index (CAVI) in the legs of 24 females with pelvic cancer-related lower extremity lymphedema. Both lymphedematous and non-lymphedematous legs were examined.

The authors concluded that lymphedema duration and the extent of lymphedema were independent risk factors for arterial stiffening. In other words, the authors suggested that the longer you have lymphedema, or the greater the lymphatic deficiency you have, the more likely you are to exhibit arterial hardening, one of the hallmarks of arteriosclerosis.

However, this study is by no means definitive. Putting aside the obvious issues with this type of strictly observational study (such as the inability to draw conclusions about any cause-effect relationship), if lymphedema does in fact promote arterial hardening as this paper suggests, it remains to be seen if this hardening is clinically significant. In other words, could vascular changes caused by lymphedema actually increase the risk of heart attack or stroke?

There is one more thing to consider here: is this apparent link between lymphedema and arteriosclerotic processes limited to forms of lymphedema that significantly impede the function of deep lymphatic vessels of the lower extremities – such as in the case of pelvic cancer-related lower extremity lymphedema examined in this study? Unlike lymphedema present in other areas of the body, lymphedema in the pelvis could influence the ability of the lymphatic system to process fats from the gastrointestinal tract.

Interestingly, this possible connection between lymphedema and arteriosclerosis may be a two-way street.

High levels of cholesterol (hypercholesterolemia) in adult mice (more specifically, an experimental mouse strain with a genetic deficiency in the ability to efficiently process lipoproteins) appears to cause lymphatic leakage, reduced lymphatic function, and tissue swelling (ref 3). In fact, this relationship appears to be ‘dose-dependent’: as levels of cholesterol increased, lymph vessel integrity and function was found to further decrease.

The authors of this study concluded that the degeneration of lymphatic function appeared to be a direct response to hypercholesterolemia. But this conclusion once again needs to be tempered. First, we are talking about an experimental mouse strain. Second, this mutant mouse line also exhibits abnormal inflammatory responses, and could also foreseeably suffer from some unidentified lymphatic malformation during development. The authors can’t really rule out either of these alternative possibilities.

So, we can conclude that if you have lymphedema, hypercholesterolemia MAY exacerbate lymphatic vessel dysfunction and worsen your symptoms.

There is certainly sufficient medical evidence to suggest that you should eat well, exercise and otherwise stay as healthy as you can, to avoid arteriosclerosis.  You don’t need to believe in a potential link between lymphedema and arteriosclerosis to convince you of this.

Nevertheless, if you do have lymphedema you should consider three important takeaways from this new area of research: